Click on the three lines for the Mobile Menu. 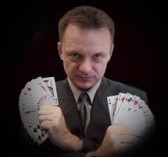 This show is also called The Magic of Reading Show. The show provides fantastic school entertainment and emphasizes the importance of reading. It's more than just a magic show. Richard explains how he first became interested in magic after checking out a few magic books from his school library when he was just seven years old. His interest in magical entertainment never faded. Richard has performed magic to amazed audiences all around the world.

This one-man show can be set up in the corner of a gym, in a cafeteria, or in your library. The Magic of Reading Show features Illusionist Richard Blake's signature card manipulation act in which cards appear at his fingertips.  Richard has performed this amazing show in every district in San Antonio ,The SA Public Library, and many private schools throughout San Antonio and South Texas. This show is great entertainment for the staff as well as the students! References are available upon request. Illusions by Blake will travel throughout San Antonio and South Texas to bring this great entertainment to you.